skip to main | skip to sidebar

Skinny people or those afraid of fat look away now. There's nothing for you here.

To explain the title: Black pudding, pork belly and bubble squeak. Three of my favourite things to eat. They are of course all low fat and form part of your 'five-a-day'..


The stuffed pork really kicked off the other two dishes. We were having a couple of friends round for dinner and I'd already got the belly in mind for main course, but wanted to do something a bit different. So, having got some Gloucester Old Spot sausage meat in the freezer, along with a large wodge of black pudding, it set me thinking that the combination of all three would be a winner.

So, I made a stuffing by sauteing an onion in butter, added it to the sausage meat with seasoning, bit of sage and then crumbled in some of the black pudding. My trusty kitchen slave Tiny then stuffed the belly and neatly tied it up ready for the oven. 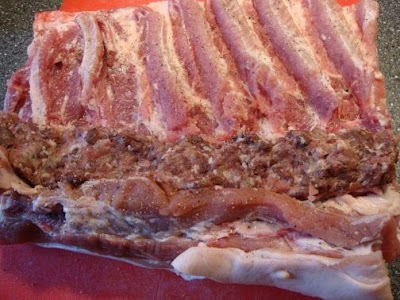 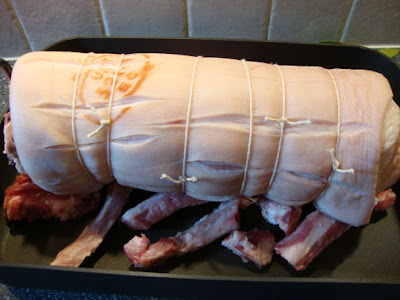 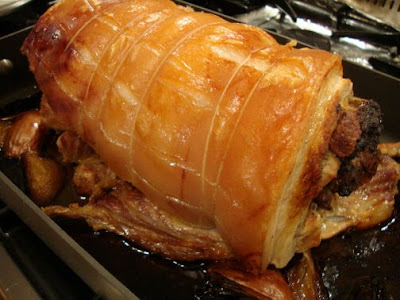 It worked brilliantly. The stuffing was deeply savoury and matched really well with the soft, moist pig meat. It was porktastic.

Our porkiness knowing no limits, the next morning our thoughts turned to breakfast (well, brunch actually) and the left over stuffing.

Fried up with a couple of eggs it was shall we say 'hearty' or more accurately 'heart damaging'. But none the less extremley tasty. 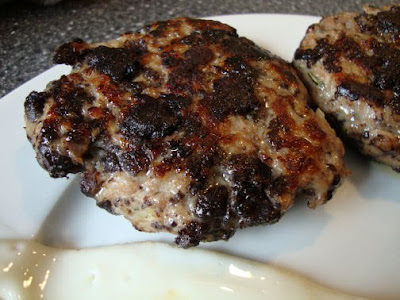 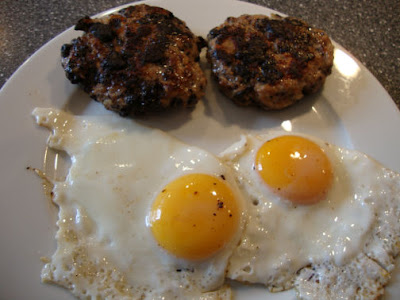 The porkfest doesn't exactly stop there, as there was the leftover stuffed belly to eat up. We didn't have it that night, as that would be too much wouldn't it? Would it? YES it would.

So, the next day, with cholesterol withdrawl, I topped us both up by making a nice big pan of bubble and squeak to accompany lovely thick slices of the pork. Even when cold, the pork and the stuffing was really good.

Right, back to the crispbreads and cottage cheese........ 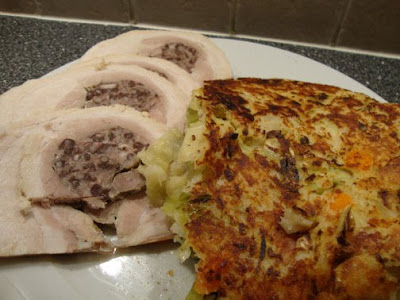